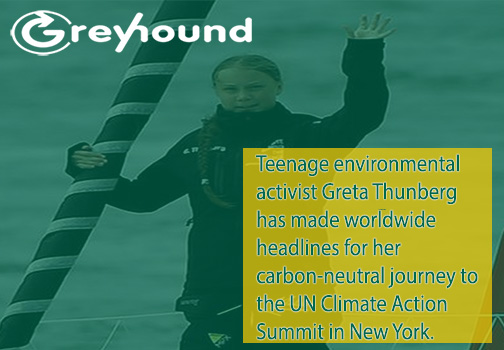 Greta Thunberg, the 16-year-old climate activist, climbed nimbly aboard the Malizia II, the racing yacht that will set sail on Wednesday afternoon whenever the wind is right and take her across the Atlantic to New York. The journey is expected to take two weeks. The sea is likely to be rough at times.

Thunberg is making this epic voyage because she has been invited to participate at the United Nations climate talks in September, and she refuses to fly because aviation has such an enormous carbon footprint. And so, on a Tuesday morning, under grey skies, here she was, aboard a sleek racing machine that had made many journeys across the ocean, but never with a 16-year-old novice.

The boat was fitted with solar panels to power its equipment. The conditions inside were spartan: There is no toilet nor much light in the cabin, so she will have to read by headlamp. In a particularly acute challenge for a teenager with 871,000 Twitter followers, she will not have much access to the internet.

Thunberg has never done anything like this before. She said she was looking forward to being without the familiar luxuries, to “being so limited”. She acknowledged being a bit nervous.

“Whether its seasickness or homesickness or just anxiety or I don’t know,” she said. “I don’t know how tough this journey will be.”

Also, she said, she will really miss her two dogs. She has packed many books (she is currently reading Quiet, a book about introverts, like her); eight writing journals, some partly filled; and boxes of freeze-dried vegan meals (Thunberg stopped eating meat a few years ago, because of the emissions associated with animal protein).

There is a satellite phone on board, so she plans to send some pictures and text messages from her voyage to friends who will upload them on her social media accounts. Going to the toilet will mean going to the back of the boat with a bucket. Her drinking water will come from a tiny desalination machine that treats seawater.

“By doing this it also shows how impossible it is today to live sustainable,” she said. “That, in order to travel with zero emissions, that we have to sail like this across the Atlantic Ocean.”

Thunberg is taking the year off school. She is scheduled to attend the UN climate summit talks next month, speaking at a youth summit on September 21st and then at the main meeting on September 23rd. She also plans to travel to Chile for the next round of UN-sponsored climate talks December.

Both meetings are to be attended by world leaders, all of whom have agreed, under the Paris climate accord, to keep global temperatures from rising to levels that would produce climate catastrophes. Still, global emissions continue to grow, and the world as a whole is not on track to meet the targets of the Paris agreement.

Drinks industry off the pace on green issues

From high water usage to packaging materials and recycling, the drinks indu...

Italy is using Malaysia as a dumping ground for plastic waste