THE CYCLING IN “RECYCLING”

A new Swedish bicycle is made from 300 recycled Nespresso pods 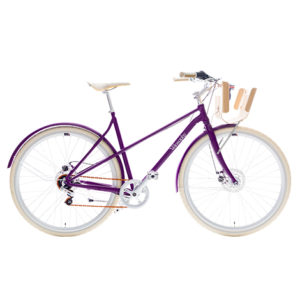 After two years in development, RE:CYCLE, a stylish urban bicycle made from discarded Nespresso pods, is ready to roll. And it only takes 300 espressos to make one.

Developed by Swedish start-up Vélosophy in collaboration with Nespresso, the limited edition model retails for €1,290 ($1,446). It showcases the creative possibilities for the afterlife for the billions of single-use coffee pods discarded around the world every year.

RE:CYCLE is Nespresso’s latest attempt at expressing its commitment to fostering a circular economy. The Nestlé-owned company uses aluminium in its capsules, a material that can be melted down and repurposed infinitely. It has poured resources into encouraging customers to recycle their Nespresso pods, which have previously been reincarnated as Swiss Army knives, fancy pens, and new coffee capsules. But these efforts, which come at a time of increased criticism of single-use products, have yet to be fully embraced by customers.

RE:CYCLE is the brainchild of Jimmy Östholm, a former IKEA communications manager turned bike entrepreneur. Intrigued by Nespresso’s recycling campaigns, Östholm inquired about the possibility of obtaining some of its recycled aluminium. The greatest technical challenge, Östholm says, was finding a way to convert the lightweight aluminium into a material rigid enough to meet bicycle manufacturing safety standards. “It was not rocket science in any sense. It just took some time,” he explains.

The bike has a few design details that hint at its origin. The frame’s plum colour echoes the packaging of Nespresso’s popular Arpeggio variant; its bell is in the shape of a coffee pod; and the carrier basket has two nifty straps for securing to-go coffee cups, among other things.

Capsule-shaped bell.
Östholm hopes other product designers might be inspired to work with recycled aluminium to offset the steady demand for single-use capsules. A recent study, commissioned by UK coffee start-up Halo, estimates that 56 billion single-use coffee capsules produced by various manufacturers each year will end up in landfills.

“Different products need different aluminium compositions…but just look at the recycling possibility,” he says. “Every bit of aluminium that exists could be recycled again into new products. I think that’s really the message here.”

Possibilities
Östholm’s experience at IKEA influenced his business outlook. The Swedish furniture giant’s Democratic Design principle champions the idea that quality products should be affordable to the most number of people, and good for the environment.”I want that premium experience, but I want as many people as possible to afford the bike,” he says.

To cut down on operations costs, Vélosophy has no retail shops or showrooms and conducts all its sales online. The resulting savings allows them to donate a bicycle to a schoolgirl in the developing world with every bike sold.

A roving reminder for recycling

For Nespresso, RE:CYCLE is a roving reminder for customers to return used coffee pods.“We’re illustrating to coffee lovers the potential of recycling their aluminium Nespresso capsules,” says CEO Jean-Marc Duvoisin in a press statement. “We have been inspired by working with Vélosophy, and I hope the RE:CYCLE bicycle inspires people to recycle.”

Nespresso capsules in landfills take about 150 years to decompose, so getting customers to recycle them is key to its sustainability agenda. They need to be brought or posted to one of the company’s 122,000 collection points worldwide before they can be processed by a certified recycling plant that has the technology to cleanly separate the aluminium shells from coffee grounds. The used grounds are made into compost, topsoil, or turned into biogas. The company says it is unable to provide an accurate estimate of how many of its pods are recycled, but a recent Wired article estimated the recycling rate at 25%.

In addition to supporting creative approaches to repurposing recycled pods, the company has recruited celebrities and influencers to star in videos about its recycling program and recently mounted a pop-up exhibition in Hong Kong to educate the public about its recycling program. Earlier this year it also donated $1.2 million to New York City’s sanitation department’s to support its efforts to capture capsules dumped in household trash.

Researchers differ over how sustainable single-use coffee pods are compared to other traditional coffee-making methods. One recent study from the University of Bath suggests that over their entire life-cycle, factoring in the energy required to make the coffee, recyclable single-use pods may be less damaging to the planet than other traditional coffee-making methods.

Still, Nespresso’s initiatives come during a time of greater scrutiny about the environmental impact of single-cup capsules. Competitor Keurig has been embroiled in a class-action lawsuit in the US over the veracity of its claims about the recyclability of its plastic-lined K-Cup pods. And in 2016, Hamburg became the first city to ban all types of single-use coffee pods from its government offices.

A Greener Election? In December, Dublin City Council said it was examining...

How can I keep my wheelie bin clean?

How can I keep my wheelie bin clean? Your wheelie bins are designed to keep...